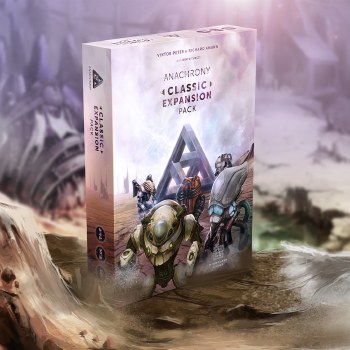 Doomsday
Previously released in Anachrony Base Box, this module features Experiment cards that allow players to change the time of the cataclysm, to the point of avoiding it completely. It adds a semi-cooperative element to the game: two of the Paths would like to see the Capital fall in the wake of the cataclysm, while the other two are striving to avoid it - but the game is still won individually, so be careful with the cooperation!

Pioneers of New Earth
In this module, which was previously released in the Exosuit Commander Pack, players can spend resources to improve their Exosuit technology, equipping them with powerful augments and sensors. On a new Action spot, players can push their luck and use their Exosuits to take on risky but rewarding adventures in the wastelands of New Earth, with various ways to mitigate the luck of the draw.

Guardians of the Council
This module features six independent, high-tech Exosuits owned by the World Council. Players may earn the Council’s favour to obtain these Exosuits and improve their arsenal. The Guardian Exosuits do not need Workers to operate, and have a placement slot at the Council reserved just for them. This module features six highly detailed, 55 mm tall Guardian miniatures. Guardians was previously released in the Exosuit Commander Pack.

Anachrony - Classic Expansion Pack is not a standalone game. It requires Anachrony Essential Edition to play.