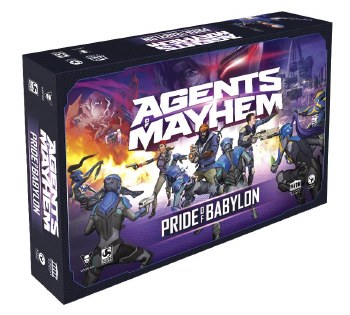 Agents of Mayhem Pride Of Babylon Base Set Board Game

Agents of Mayhem: Pride of Babylon is a story-driven 3D tactical boardgame base on the newest video game in the Saint's Row Universe.

The world has fallen under the rule of LEGION, a supervillainous cabal of criminal masterminds. Doctor Babylon, LEGION’s head of technology and development, has unlocked the secrets of the cosmic power source Dark Matter and plans global armageddon. In the wake of LEGION’s ascendance, a crack-shot team of hand-picked agents known as MAYHEM emerges, whose sole purpose is to destroy LEGION and take the world back. Will you use LEGION’s Dark Matter-powered doomsday devices and super-weapons to wreak havoc on Seoul: The City of Tomorrow or will you join the band of gadget-wielding misfits to dish out some MAYHEM?

Agents of Mayhem - Pride of Babylon is a team vs. team skirmish boardgame for 2 to 4 players. The game is played on a modular 3D board that is fully destructible. You and your opponents will play through a radiant story where every choice you make will have effects that ripple throughout the campaign. Play as either LEGION, an organization of super villains who have taken over the world, or as MAYHEM, a band of anti-heroes who will do what ever it takes to stop LEGION.Pride of Babylon is a story-driven 3D tactical boardgame based on the newest video game in the Saint’s Row universe - Agents of Mayhem.

3D BOARD! - Play on a board made of modular tiles with 3D multi-level buildings that are up to 240mm high! Use the buildings as cover or to dodge an attack by jumping behind a wall. Take the high ground to gain elevation advantages and attack bonuses against your enemies. The modular tiles allow you to make hundreds of different game maps.

Destructible Terrain - You can drive enemies from behind cover by triggering explosions. These explosions and your attacks will often cause damage to a building which will eventually cause it to collapse.

Unique Characters - Every MAYHEM and LEGION character has their own highly detailed miniature and a Character Board that outlines their stats and abilities. Each character has a unique gameplay style and you will have to choose the right team for each mission. Finding the right combination of characters and tactics is half the fun of Agents of Mayhem: Pride of Babylon. The other half is blowing stuff up!

Customizable Characters - Customize your characters before each mission with an arsenal of gadget cards that slide into their Character Board and Mayhem Cards that let them unleash crazy and hilarious powers.

Character Progression - After every game, you will have the opportunity to unlock new Gadgets and buy upgrade tiles for your characters. Upgrades stay permanently in the character’s board until you decide to reset the game. Fast Skirmish Gameplay and Tactics - Alternate taking turns with your opponent in quick game play that keeps you involved at all times. On your turn, you take actions with one of your characters while your other characters regenerate some of their resources. There is no downtime and you fluidly take turns back and forth until the Mission ends.

Story Campaign - Play through an immersive campaign with a radiant storyline. Decisions you make have ripple effects that impact your future missions, assets, and abilities. Every group’s experience is unique in an open world that can branch into dozens of different story-lines full of humor and awesomeness with hundreds of ways to win.

Humor - Agents of Mayhem - Pride of Babylon is full of over the top action and humor. Get immersed into the Saints Row universe with hilarious card flavor text, mission comics, and sometimes helpful character public service announcements.

Note - We rate Pride of Babylon as PG-13. This board game is based on the popular video game series which contains strong language in some instances.